Volvik Vivid golf balls are quite eye-catching for a lot more than just some obvious reasons, but that’s not all. The new range launched in 2020 is also offering some performance improvements over their previous versions.

In a Hurry? Here are Our Favorite Volvik Vivid Golf Balls

Now these golf balls are being sold in a range of 8 unique, fluorescent and bright colors. These golf balls don’t just stand out from their competitors in terms of aesthetic appeal, but they can also produce more distance, less spin, and higher launch compared to their previous versions. In addition, their 3-piece matte finish not only looks brilliant but also manages to create the consistent performance that is expected by golfers.

Do you like what you’ve read about the Volvik Vivid golf balls up till this point? We’d suggest that you keep scrolling further to find out some other great details about these fantastic golf balls.

Our Review of the Volvik Vivid Golf Balls 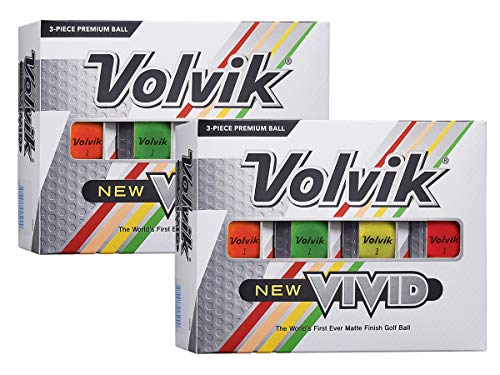 On their website, Volvik states that these golf balls are the first ever matte-finish balls in the world. As impressive as that sounds, you might be more impressed by their range of colors, which includes white, purple, blue, pink, yellow, orange, red, and green.

In terms of performance, Volvik says that these balls produce more distance, higher launches, and lower spin because of their Nano Bi High Energy Resilient Core. Since there is minimized glare on the surface of this ball, the brand also states that it has the ability to improve ball striking and improve concentration.

Lastly, and more importantly, Volvik states that these golf balls were products to increase their visibility on the ground and in flight.

With all of the above taken into consideration, it’s time to put these balls to the test.

Volvik had produced golf balls before the Vivid but none of these had managed to attract quite as much attention as this particular ball, and this has a lot to do with its matte finish.

This dull fluorescent matte finish happens to be the first ever of its kind and the unintended result of this is that they almost seem like they don’t have any dimples. Of course, this cannot be possible and Volvik’s South Korean production tailors each ball with 322-dimple patterns.

Volvik has told interested golfers that the matte finish helps to improve the ball’s concentration and striking, since it reduces glare as compared to other balls. Its 3-piece construction also includes their cutting-edge Nano Bi High Energy Resilient Core which helps generate greater distances. These balls are also designed to reduce spin and produce higher launches with the driver.

Since it is a mid-compression golf ball, you should expect a soft and comfortable feel around the golf course whenever you’re chipping. You will also get a boost of confidence with that satisfying feel and sound off the face of your putter.

Once we had gotten over our awe of how aesthetically pleasing these golf balls were, we decided to put them to the test against the launch monitor. We used a wedge, 7-iron, and a driver to check how they fare across the bag.

After striking 10 shots each, here’s what we found:

After several drives, it can be said with confidence that the Volvik Vivid golf balls produce low spin. We found that they produced an average of 1800 rpm and their side angle reached approximately 2.5 degrees – meaning they ran pretty straight.

Simply put, these golf balls could help reduce unfavorable trajectories for golfers who aren’t so good at slicing.

Moving ahead, the speed of the ball was quite high. When we managed to strike it at the centre, it produced an average velocity of approximately 160 mph. This was a lot faster than we expected.

The ball’s carry was also quite impressive. The best we managed to see was somewhere around 280 yards, which is a lot longer than we usually hit. Still, we saw the ball produce a very impressive roll, which made 300 quite achievable in total yardage.

Keeping in mind that the Volvik Vivid golf balls were designed to produce low spin, we weren’t really expecting to see high numbers, These golf balls aren’t soft and our tests proved it.

When we hit them with a mid-iron, we saw a higher-than-average speed of 120 mph. When we used the driver, we were able to produce a pretty respectable carry of about 170 yards without really exerting ourselves.

The launch monitor displayed the balls backspin at around 5600 rpm. No this was definitely below our average rate of spin using a 7-iron. This feature can allow the ball to keep flying straight, but it can also make it difficult for experienced plays to add more stopping power or shape to their shots.

Since the Volvik Vivid golf balls have a compression rating that stands at 75, we should classify them as a mid-level ball in terms of hardness. This ball’s core is less dense, softer, and features a denser outer layer. When put together, these balls allow for a lot more compression, increasing your overall ball speed and also producing straighter shots with lower spin.

Our Volvik Vivid golf balls review found that this product is perfect for high handicappers and those people who need every bit of help they can squeeze out of a golf ball to hit straight or locate their ball on the course.

According to our tests, these golf balls produce increased roll, great carry, and an overall pleasant golfing experience. The cherry on top is the eye-catching color and matte finish, which is quite rare over the greens.

These, by far, are perhaps the most easily visible golf balls in Volvik’s range of golf balls and you might even notice how they stay in the air a little longer as compared to their alternatives.

All things considered, Volvik Vivid golf balls are every bit worth your time on the greens and we would highly recommend every level of golfer to give them a whirl.