TaylorMade has been making quality irons for a long time now and between the best irons they are offering at the moment, you can find the R15 model. Sporting a center of gravity running at an impressive speed with an increased sweet spot, you have total control of your shots.

If you are looking for an increased swing control and straighter shots, you may want to keep on reading.

The main difference between this club and other models on the market are its movable weights, which make a big difference when it comes to performance.

The fact that you can customize your center of gravity allows you to configure its weight to your advantage. If you have a few years of experience under your belt, you will be able to change the weights between shots. For example, you can control how much spin you want the ball to have with a few adjustments to the weights.

There is a chance that you will not achieve a grand distance or accuracy at first, so don’t get frustrated since it takes some time to get used to the weight system.

You will feel that your shots will not curve as they usually do, but you will need to practice with different weight configurations to fix this.

Additionally, experienced golfers state that the club’s loft angle personalization feature can also make a significant difference. When you increase the loft angle, you will find that your launch will increase and vice versa. Source

A flawless design is not often a priority when looking for the ideal iron, but with this model, looks are a bonus.Although older TaylorMade irons seem more complex, newer models have become simpler but slicker. You can find this model in black or a matte white. The design is a bit more edgy, which has become very popular nowadays.

The contrast between the two colors is flattering the style of the club, giving it a flashy but clean look. Plus, the white crown lets you have a good look at the alignment mark before you swing.

Overall, it is a very forgiving driver, but you will still need to have a few years of experience to properly handle this iron.

The R15 has a more prominent sweet spot than usual, which means that you will have fewer mishits. Plus, the alignment mark is a bit more noticeable on the crown, which will allow you to correctly center your swings.

As we mentioned earlier, the Front Track system will also help you control the speed and direction of your shots. This is what controls most of the iron’s forgiveness since it positions the center of gravity a bit more to the front than usual.

This means that you can swing faster while keeping a decent distance even if you miss your shot. If you think that this is not enough to control mishits, you can still personalize the weight system to correct this issue.

The weight system can be adjusted to make the iron a bit more stable when swinging, which will significantly reduce the number of mishits.

It’s important to note that this club is not designed for beginners. Regardless of how forgiving it can be, you need to have more control of your swing before deciding if you need to move the weight either to the sides or the center.

When looking for a new club, many golfers make their decision based on a model’s price. In many cases, the best irons are a bit more expensive, mostly because of the extra features and accessories. The same can be said about the R15.

While it is more expensive than other irons, its technological advancements and features make this model worthwhile. Cheaper models don’t even come close to the performance of the R15.

The thing is, it may even be expensive compared to other models with the same features. So please take that into consideration.

When it comes to quality, it is a pretty rough model. It will eventually scratch like any other driver, but it won’t end utterly useless if used correctly.

How Does It Compare?

If you are still not sure about the forgiveness rate of these models, you should check out the M3 model. Additionally, this iron is specially designed to reduce spin, which will increase travel distance.

It also includes a set of movable weighs but as you can see, they rest in the opposite axis. Because of this, if you move the weights to the sides you will get a better forgiveness rate than with the R15.

If you find that the customizable weighs are a bit too much, you could also try the M4 model. It is not as forgiving as the R15 or the M3, but it still holds certain features from these models.

To begin with, this model does not have any movable weights, which means that it’s a bit more straightforward. Instead, it brandishes an increased sweet spot area thanks to the Hammerhead slot.

Although this is an older model, it comes with a different movable weight configuration. Being the first model of the M line, it brought a new customization feature, which is the double axis movable weights system. This system offers a few more combinations than the R1.

It can be very forgivable and adds extra speed to your shots, but you should practice with the different configurations available, so you know exactly how you want them to be when you’re playing more serious games.

If you don’t feel like the TaylorMade model has the features that you are looking for, you may want to have a look at this Callaway model. Instead of just moving the weights, this model allows you to completely remove the weights and add new ones.

Plus, it comes with Jailbreak technology which gives you an increased ball speed and more control over the ball rotation. 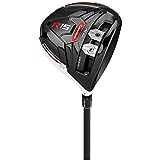