The TaylorMade P790 Iron is the brand’s latest addition. Players just love how the club manages to combine both the playability of cavity-backs and the elegant slim look of its blades resulting to what is probably the most versatile iron currently offered by TaylorMade.

​Irons have greatly evolved since the early days of golf. Back then, they were simply called irons because there they were molded from melted metal and shaped into one solid piece of equipment without any cavities in their backs. These days, however, irons are divided into different categories based on design and construction.

Blades are irons that have metal heads that are usually made out of forged iron. Since the metal is more or less evenly distributed, its center of gravity is a bit higher while its moment of inertia is lower than cavity-backed irons. This, it creates a relatively smaller sweet spot making it a bit more difficult to handle as novice players could easily miss-hit their shots.

However, most golfers prefer its clean-cut design compared to the bulkier form of cavity backs.On the other hand, cavity-backed irons are just what the name suggests – there is a cavity behind or at the back of the club head.

The metal removed from the center back of the club head is then redistributed to the heel and toe of the head area, which effectively alters the head’s center of gravity. This lowers its center of mass allowing the club to achieve a higher launch angle.

However, the difference between these two types of irons has started to become a blur. In their quest to provide the best golfing equipment to players, companies such as TaylorMade have been coming up with new designs that have greatly enhanced the accuracy of forced blades as well as increase the feel and maneuverability of cavity backs.

In this TaylorMade P790 iron review, we will try to find out what sets it apart from other easier-to-hit irons. 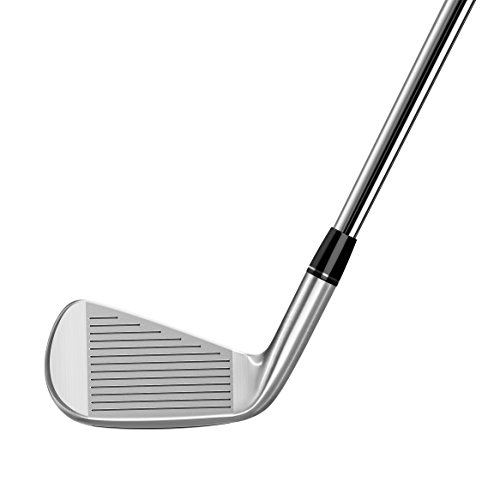 What The Speedfoam Technology Does

​Golfers have become pretty excited when the TaylorMade P790 Iron was launched in August. What got everyone talking is that the P790s has finally answered what every golfer has been longing for – the refined and streamlined looks of a blade but with the capabilities and playability of a cavity back.

TaylorMade P790 Iron sports the new SpeedFoam Technology. While the iron looks like a blade, the club head is actually hollow inside and has a screw in the toe area. This is the entry point where around 4 grams of SpeedFoam were injected before it eventually expanded to fill the entire cavity inside.

This material supports the forged face that is just 1.75 millimeters thick in some areas.This special polymer makes the rather thin face strong without affecting its flex at impact to improve ball speeds. Aside from generating ball speed, the SpeedFoam also improves the sound generated when the club hits the ball with its sound-damping properties. The material also produces a soft feel and responsive feedback with each swing.

​Another important technology embedded deep inside the TaylorMade P790 iron is the tungsten weighting. Yes, the name P790 actually refers to its blade length which is 79 millimeters long so this explains why this club has a greater forgiveness rate compared to other models.

But that is only part of the reason.The other reason for this very forgiving club is the tungsten weight inside strategically placed internal metal-injection-molded (MIM) tungsten weighting. The tungsten weight is added to calibrate the club head’s center of gravity for greater performance and to increase its moment of inertia (MOI). As you might have guessed, the iron allows you to play great even with slight miss-hits.

​The TaylorMade P790 iron also features a Speed Pocket in the sole which cuts through the cavity. What this means is that the clubface’s lower part is very flexible. This improves ball speeds and forgiveness even for shots where the ball hits low in the face, which is a common problem for golfers.

In addition, the ultra-thin 1.75 face of the P790 incorporates re-engineered Inverted Cone Technology which is specially reconfigured for the smaller area of the club’s face. The improved Inverted Cone Technology resulted into thinner edges of the face, which further enhanced the flexibility from heel to toe optimizing the face for creating greater ball speed with each swing.

It is around 25 grams lighter than the original. While it delivers a lighter, faster feel, it still sports the same profile as the original.

The TaylorMade P790 iron performed extremely well during our testing. It was able to go neck in neck with other well-known irons in terms of ball speed. In our testing, ball speed averaged in the 120 to 130 mph range.Surprisingly, the iron also excelled in terms of distance.

During our testing using the iron, we’ve consistently produced distance in the 170 to 190 range, which makes it one of the best irons we’ve tried thus far.But the biggest surprise, at least for us, is that the club is very forgiving. We went to the golf course somehow subconsciously thinking that we’re going to test a blade, probably because the P790 really looks like a blade.

We were pleasantly surprised that its forgiveness is just what you’d expect from a cavity back. Despite its stylish bladelike look, we had to remind ourselves that it’s actually a cavity back iron.

Our Final Thoughts of the P790 Irons

​If you want the looks of a blade but long for the forgiveness of a cavity back, then the TaylorMade P790 iron is the perfect equipment for you. Ideal for players with low and mid handicaps.