Pondering over a long shot club?

Trust the M6 Rescue to save yourself the thought.

TaylorMade has once again come up with a versatile and long hit hybrid club, which promises to be their longest yet.

The power in it alone is enough to raise your confidence. As a golfer who likes to hit long and straight, there is no better option than the M6 Rescue to quench that thirst.

Golfers are either captivated by the trajectory or the straight shot.

For those who prefer the second kind, they need a club to withstand the force and not some flimsy shaft that feels good but doesn’t go the distance.

So without further ado, I will explain why TaylorMade M6 rescue actually rescues you from mishits. 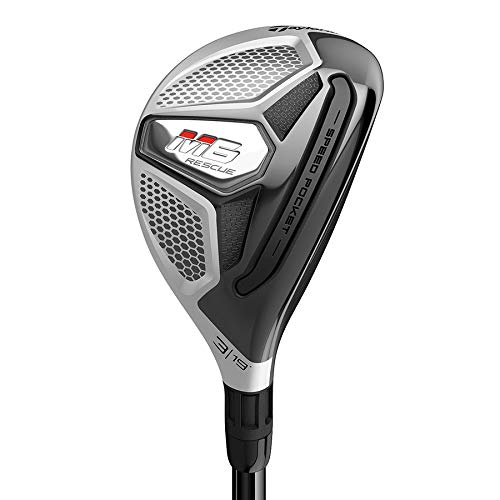 TaylorMade has dominated the golf market for a while now with their drivers, but their hybrids aren’t behind either.

The amount of engineering that goes into each of these products is clear when you see how they developed the product is. One of the main additions to this model is the twist-face. To specifically counter mishits, this club has more pronounced curves and twists adjusted after reviewing thousands of misses.

They started using these techniques on the drivers first and then moved to other clubs. This hybrid is much smaller than regular drivers, and it has required more research to adjust to mishits and implement this twist face technology.

Also, to implement this, the curves had to be highlighted even more than in other clubs, which is why this hybrid needed a different design not to disturb the golfer’s vision when hitting the ball.

Now, more on the design. This shaft has an elegant steel body that makes it strong and sturdy. Its body also has a low CG that makes the launching easy and makes it more forgiving.

Furthermore, the newly introduced stepped crown frames the ball with ease and feels great when it makes contact. It is also easier to align with. That is something handicappers should take notice of.

One thing its predecessors have not been able to accomplish is a thinner face. As this brand pledges on power and distance, speed, and lightweight is something that they were forced to forsake.

But with hybrids being smaller in general, they had to adapt quickly, which they have managed with good efficiency. The face of this club is thinner, and the speed is also greater. To further work on their speed, the speed pocket was also redesigned for greater flexibility and efficiency.

Improving on speed, distance, and body, this club packs a punch. It is one of the mainstays in my bag.

Now that we have an idea of its features let’s look into the properties that really speak out.

While most brands these days work on trajectories and distances, ignoring the simple issues that the golfers face regularly, the M6 Rescue is not only well prepared but also well equipped to get over those hurdles.

Their twist face technology tackles mishits that occur due to high toe and low heels. They have already equipped their drivers with these curvatures, but they only introduced it to the hybrid in this one.

Since the hybrid is smaller than other clubs, it needed more work to twist open and close according to the requirements. But they have only made it better by making a face even thinner.

With the twist-face and thinner face, the speed of the club has improved a lot and the sidespin that troubles many golfers has also been reduced — resulting in straighter shots with more consistency. Moreover, with this, you’re likely to make fewer mishits, and it is a confidence booster.

Both amateur players and pros need this hybrid for its innovative technology.

The body is made up of steel with a long shaft. TaylorMade is already known for their strength, have improved their speed in this latest hybrid to go along with their superior power.

Also, the lower CG and stepped crown, that we have already mentioned also makes the club hit faster and cover more distance.

While they had this in their previous models, the redesigned speed pocket with a TPU slot insert makes it easier to hit low strikes, and it also gives you better turf interactions.

While this brand has spent most of its resources on developing the drivers previously, the new M6 rescue is different.

The sheer amount of research and engineering that went into the small head is incredible. As drivers and other clubs have bigger heads, it is not difficult to instill multiple features in it.

Even though the M6 hybrid has a really small head, the technicalities within it will go unnoticed even by longtime pros.

This is why, as a golfer, I find this club to be very innovative. And it brings me great joy in knowing such effort is being put into the clubs to suit the golfers.

Golf is already a difficult sport. Little differences make for huge changes in the result. Therefore, this hybrid is one of a kind with its superior modifications.

Here we have some of the most commonly asked queries regarding golf drivers:

Does the smaller head make it harder to hit?

No, even though the head is smaller, the twist face technology helps with mishits.

Can handicappers use this?

This club is for all golfers who want to hit straight with extra power.

Is it easier to hit than Irons?

The answer varies among individuals and also their overall preference.

How is it different from the M6 and M5?

It is an upgrade with the newly introduced Twist-face technology.

How is the value for money?

The value for money on this is too good to believe as it is a technical and precisely adjusted hybrid.

To hit longer distances and feel stronger, you need this in your bag. While irons do the trick, this hybrid gives you much better control.

Finally, better players will be able to enjoy the benefits of the curves quite well.