TaylorMade’s M4 Iron sets present golfers with the opportunity to bring an all new style club to the golf course that can bring several benefits and upgrades to any golfer’s club inventory.

There are a number of in-depth features that this collection of golf irons are equipped with, including an all new optimized weighting feature that can help generate more forgiveness when the golf ball is not struck at the center of the club face.

This is just one of the several upgrades that this product review will take into account when analyzing the TaylorMade M4 Irons Set.

There are a number of factors that provide both positive and negative impacts when making an in-depth analysis of the features and design of the TaylorMade M4 Irons set.

Perhaps the most noticeable feature that golfers will take into account right off the bat is the construction of the golf shaft on each of the irons.

This is a feature that was applied with aftermarket shafts that can help generate ball speed and create a high launch of the golf ball.

An increased level of control has been added to the M4 Irons due to the construction of the club face which is designed to keep the ball straight and generate higher ball speeds and forgiveness than ever before. This particular addition really improves the overall handling of the club and should be considered as a welcomed improvement by most golfers.

The heel and toe weighting offer golfers the opportunity to customize the level of control that they indeed have when swinging from the tee box. This provides a greater level of forgiveness and control that few iron sets have.

​The after-market club shafts have been constructed to offer golfers with the opportuniy to hit the ball further than ever before. These club shafts have been constructed with heavy duty steel, which is a nice upgrade from standard graphite shafts. RIBCOR allows for golfers to have a greater margin for error when swinging the club from the tee box. This sophisticated technology allows for more potential in terms of driving distance and accuracy from an overall perspective.

One of the most important factors when analyzing a collection of golf clubs is the durability of the clubs themselves. With the extremely high-quality design of the M4 Irons from Taylormade, it is extremely clear that durability matches the quality standards that Taylormade’s reputation has earned over the last several decades.

After taking an in-depth look at just about every factor that goes into the overall design of the M4 Iron collection, it is clear that Taylormade went in with their full effort to ensure that they delivered on all aspects of the club design. The M4 Irons are a great collection of clubs that could potentially improve the performance of any golfer on the golf course. 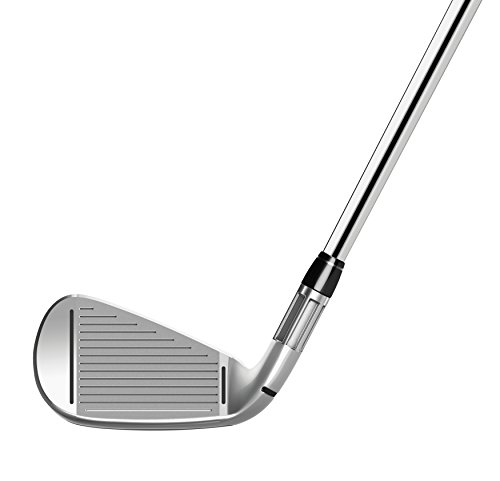 How Do They Compare to Other Irons?

The Callaway Golf Men’s X-Series 2018 Irons Set is similar in many ways to the Taylormade M4 Irons that have been featured in this product review. One of the main similarities between these two collections of irons are the club shaft. Both club shafts have been constructed with steel, and the configuration of the club shafts both optimize control and handling when swinging the club. Callaway’s collection of irons takes forgiveness into account less than Taylormade’s irons, which could indicate the Taylormade irons could be better suited toward beginners, while Callaway targets more experienced golfers.

The Cleveland Golf Men’s Launcher HB Iron Set differs from the Taylormade M4 Irons in several different ways. The first and probably biggest difference is the fact that these irons have been constructed with graphite rather than steel. This in-fact makes an incredible difference when swinging, handling, and controlling the golf club during a full-power swing. These clubs have a more progressive and hollow design, with a less-forgiving club face that trends toward experienced golfers.

​The Cobra 2017 Golf Men’s King F7 Single Length Iron Set is the final alternative iron collection that we will be taking a look at in contrast to the Taylormade’s irons. These Cobra irons have been designed with the focus on customization and control. These irons are available for both hand orientations and offer the ability to equip both steel and graphite shafts. These design options really show how Cobra believes that its clubs are customized to each individual player. In addition to these custom features, these irons have also been equipped with a power-shell face that can help golfers achieve further distance than ever before.