When a person decides to start golfing, or when a golfer considers upgrading his golf gears, most players usually first think of getting golf clubs, especially- putters, drivers or irons.

In fact, most of the conversations involving golf amongst the players revolve around talking about drivers and putters more than anything else. The last one to be considered is always wedged.

This may seem odd since wedges look very similar to the other clubs, but their features and purposes can be very different and unique within it. Moreover, there have been numerous studies that have shown that wedges are responsible for almost 25% of shots made by professional golfers.

Pro golfers not only consider wedges to be one of their top golf clubs in the game, but also, many of them customize their wedges according to their preference by making changes or adjustments to the key features of the club such as sole size, head shape, angle of the sole plane, loft angle, etc.

These adjustments are not done to change the appearance of the club; it is done to change the way it works in the game. Golfers sometimes use two of the same kind of wedges with different bounce angles for specific objectives in play. 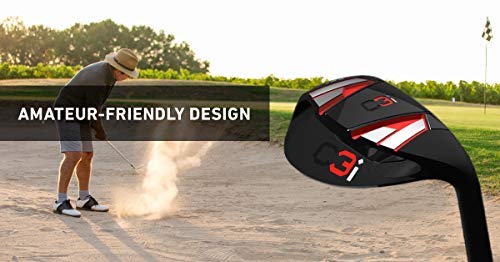 What is a Wedge?

So, the wedge, as golf gear, is immensely important for the game of gold in general. But what is a wedge?

No, it is not footwear or a potato snack. In Golf, the wedge is a kind of the club made of iron designed for use in special situations.

Wedges are characterized as the clubs having the high lofts, the short shafts and the heavy club heads among all other clubs.

These features are very particular to help the players to overcome “hazards” in the golf course. You can overcome hazards by using lob shots, which are high and soft shots that land and stop at once without rolling further.

These shots are usually very precise and cover shorter distances. These types of shots can help to extract the ball out from tricky spots into the green very easily and, so, they are very important.

The hazards and tricky spots to surpass may include sand, muddy ground, high grass and even underground. For this reason, different wedges come with a variety of designs to serve various functions by grouping them into four categories; sand wedges, pitching wedges, gap wedges and lob wedges.

The infamous sand wedge is a wedge that is open-faced, mainly designed for shots on sand bunkers and traps, hence the name. A sand wedge is identified by its having the broadest sole of all wedges, which allows the greatest amount of bounce. This means that the club head tends to slide through sand and does not dig in. The club can also be used in tricky spots like thick, soggy ground or mud.

Even though it has a wide sole, which can lead to higher bounces than necessary in some situations, sand wedges can usually be used just like any other wedge.

With the skills of a professional golfer, it is possible to hit a sand wedge between 80 and 100 yards as well as with a chip shot to produce short “lobs” of between 20 and 60 yards.

Therefore, sand wedges can be very versatile and advantageous for almost any shots towards the greens.

Design of a Sand Wedge has features that make it unique such as it is a) heavy club head, b) angled sole that changes the bounce angle, c) the loft angle and d) the shaft size.

The heavy club head moves the center of gravity low and forward, which allows for higher flight trajectory i.e., higher altitudes. Earlier designs of sand wedges used to have lighter heads. But the modern sand wedge has a much higher mass, because of which, it is often the heaviest club in a golfer’s bag.

These wedges can weigh up to 40oz, which means 2.5 lb. or 1.13 kg. With this, players can drive the clubhead through the firmer lies that are found in many courses.

Sand wedges can have different lengths of the shaft, both short and long. They have one of the shortest shafts usually, which can be between 33 inches or 84 cm and 36 inches or 91 cm.

In some sets, however, the sand wedge can have a longer shaft than the other wedges like the one for pitching. Some other sand wedges, follow the systematic progression where they have shaft lengths that are shorter to allow for higher lofts.

Again, there are many sand wedges longer than wedges that have a higher loft. These different variations in the length and lofts create differences in the performances of those wedges when played in the game.

Sand wedges provide more flexibility in addressing the ball as it helps the player to figure out how to line the ball in the center perfectly; this is possible because it has a leading edge that is a little higher off the ground. The sole is angled in such a way that the bounce angle is steeper.

The reason sand wedges are ideal for bunker shots is that its sole high angle makes the club to bounce off any sort of surface, whether it be soft sand, thick grass or mud. It allows you to send it back to the greens. The bounce angle is designed literally for the sole purpose of bouncing off soft sands.

Usually, sand wedges may have a loft angle that ranges from about 54 to around 58 degrees. They also have a bounce angle of about 10 to 16 degrees, depending on how a company customizes them.

Having a loft of about 55 to 56 degrees is traditionally ideal for most wedges. So, sand wedges also have the highest loft angle. This distinction now goes to the lob wedge, which can have a loft angle of 60 degrees or more.

Even though the loft angle usually starts from 54 degrees and can be increased to a maximum of 60 degrees, choosing your loft angle will depend on many factors involved in the game itself. But it is clear that the minimum loft angle for a sand wedge has to be 54 degrees and the maximum can be 60 degrees.

Importance of The Sand Wedge Degree

The angle of the loft of the sand wedge you are using will determine what kind of swing can be expected from any shot. Most professionally skilled golf players can achieve 70 to 100 meters of distance, especially if they have decent swing speeds.

On the other hand, the main factor here is the loft angle, which will ascertain how far a shot will send the ball. The higher the loft angle is, the lower the distance traveled by the ball will be. As a result, distance potential is dependent on the loft. Which means, the higher loft a wedge has, the more likely it is to have high elevation but low distance produced and lesser roll due to have more control.

A prevalent question among golfers is “How many degrees of loft do you have on your club?” and the answer can, even though be just a number, give a lot of idea about how the club would perform in the game.

Loft angle gives an idea of the distance that the ball will go and the type of trajectory the shot will have, as in, how high or low in altitude it will be.

Golf clubs with lower loft angles will provide shots with the ability to travel longer distances. But a golf club with higher loft will make the ball rise high up in the air on a steep angle and then descend, making the distance traversed much shorter.

Having more loft angle makes the clubface appear vertical since it points upwards, and so the ball tends to cause a very steep trajectory by rising sharply as well as falling sharply.

Due to this cause and effect relationship between the loft angle and the shot difference, golfers often opt for increasing or decreasing the loft angle, usually by 1 or 2 degrees.

Does a Player Need to Worry About Lofts?

Golfers who are beginners or those who play as a recreation do not bother about the need for lofts to be strong or weak because they do not need to worry about nitpicking the right angle for the right shot.

However, Professional golfers pay great attention to the technical details of their clubs. For this reason, some of them resort to altering or making adjustments to the loft angles on their clubs to better suit their needs.

When it comes to sand wedges, you have to choose whether you should use a sand wedge with 54 degree loft or 58 based on two factors: a) how one prefers to organize the clubs bag and b) one’s skill level.

Typical golf bags only allow you to have 14 clubs in it. Subsequently, the bag should usually set up to have a specific type of arrangement that is preferable by the player depending on what he prefers or thinks is better.

Besides, taking the usual driver, fairway wood, irons, and putter, it is a very efficient choice to arrange the bag in a way that there is a consistent gap of 4 degrees between lofts of the wedges taken because that can give you a choice to hit the ball at your preferred consistent distances.

A lob wedge as an extra would not be necessary. In this way, it will not be essential to bring all the types of wedges or have difficulty choosing since you can decide to play with three clubs that will lead to three consistent distances.

Accordingly, by replacing all the wedges and using only three, it leaves enough space for you to take another longer club.

Golfers’ skill level can also be considered when deciding the loft degrees of their clubs. According to preference, some might bring the three wedges mentioned in the example and make do.

But sometimes, some of the sand wedges that are made for certain shots require more skill and precision, which causes people to struggle.

The sand bunker, which a sand wedge can work in, can pose some difficulty for many golf players because it is, by no means, an easy task to do.

In that case, the golf players should use the usual golf clubs to make do and continue to practice to get better at playing in the sand or tricky spots like that.

There are some sand wedges with much higher shafts to make it easier for beginners to work through the sand shots into the greens.

All in all, there are many options for sand wedges for a variety of people with different skill sets and different needs. A highly professional golfer can even grind the club according to his own preferences.

Nevertheless, it is recommended to use the 50, 54 and 58 degrees setup for loft angles. Such wedges can be found from both the Mizuno wedge and even the Cleveland RTX cavity back wedges.