Golfers tend to be very particular about their golf equipment. After all, one change and the whole of their gameplay changes. So when looking to purchase, it’s quite obvious that only the most reputable brands make it to the list with their products.

Titleist is one such brand. Starting 80 years ago, this American brand is known for its golf balls and clubs. Over the years, the company has become one such brand that appeals to all golfers regardless of their stance and handicap with golf.

Therefore, it is pretty evident that if you are out there looking for irons, Titleist has some of the best in the market. The brand seems to have captured the essence of golf players with irons. The irons on offer in the brand range are currently the best Titleist ironsever to come out.

The need to get the iron right in addition to the need that a gold player feels – Titleist understands it all. They know that a good iron can help a low handicap player feel confident and allow them to perform accurately consistently with an iron in hand.

So if you are looking for the very best in terms of feel without compromising your performance, Titleist is the brand for you. There is something for everyone from performance numbers of T400 to 620MB’s – not to mention the aesthetics of the brand Titleist that give it the luxury feel.

Hence, to validate all the positives mentioned about Titleist, we have compiled a list of the top ten best Titleist ironsof all time so that you can find the one you are looking for! So without further ado, let’s get into the best Titleist irons, shall we? 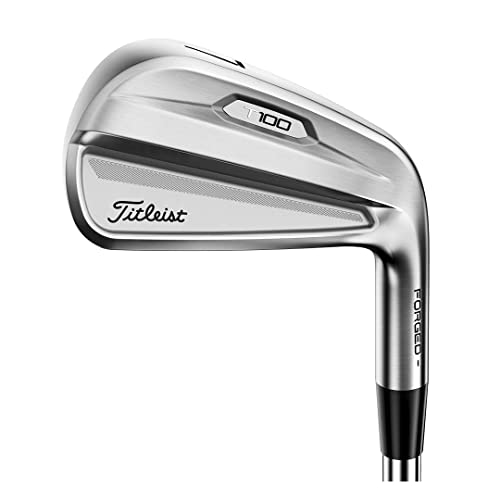 The classic iron shape that somehow allows a margin of error makes it easier to hit a good launch. Furthermore, as the Titleist T100 iron has a more traditional forged cavity construction, it becomes a more compact and responsive iron to play with. The hit can feel soft, yet it is a solid one that creates an impact to get through the turf easily. With all that being put in perspective, Titleist T100 might not suit golf players who consider themselves purists or high handicappers. 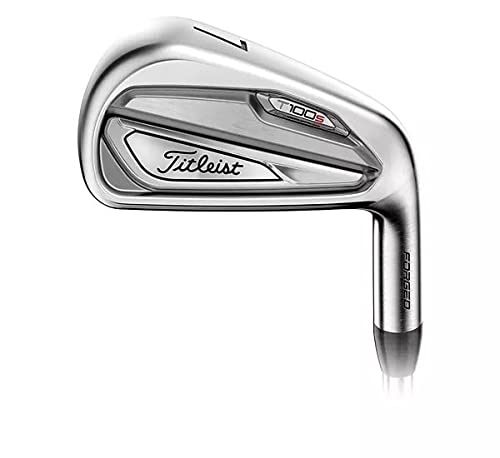 Another great one in the same series alignment of the Titleist T100 iron is the all-rounder Titleist T100S iron. The golf players are keen to have this in their equipment with the same amazing classic shape and features because it feels premium to hit for a great distance. Even though the model clearly doesn’t suit stronger lofts, it is considered one of the best compact mid handicap irons for golfers.

Quite obviously and objective on the technical stance of players, Titleist came up with the T100S to bridge the gap between T100 and T200. With T100S being a 2° per iron or club, a better, stronger lofted version of T100, it stabilizes the players’ need before they can upgrade with T200. With consequently similar attributes, T100S carries a responsive yet thin face for a great but forgiving appeal for the players. Thus, unlike T100, T100s make for a better option for lower handicap players as they like to increase their play’s distance without compromising the grip and control of the iron. 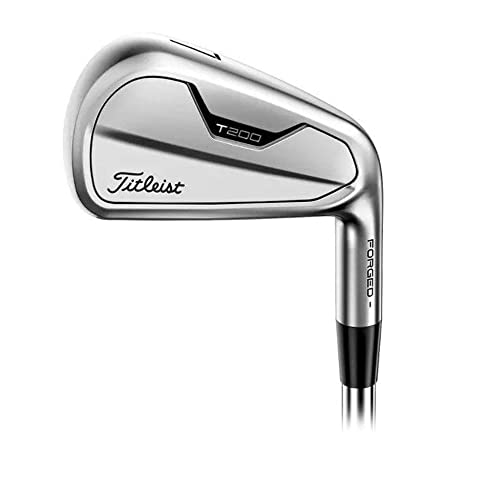 The Titleist T200 iron promises more distance in a compact face of a golf iron. Even though it really isn’t for the mass appeal because performance overpowers the need to collect for golf players. So for those looking for a premium feel and space for workability – they can move along to other advanced versions and let T200 be. However, depicted to be the most versatile iron introduced by Titleist, a broad range of golfers have agreed to disagree.

The same classic shape with a compact face, T200 has taken a few elements in aesthetics from T300. Hence, seen as a thinned, more slimmed version of T300 with features that prove to be on the lesser offset, making it a worthy iron for more players. Moreover, the premium irons have tungsten weighting, which allows for a more forgiving play that impacts increased distances. Quite naturally, T200 works best with golf players who would rather work on their performance with a premium club. 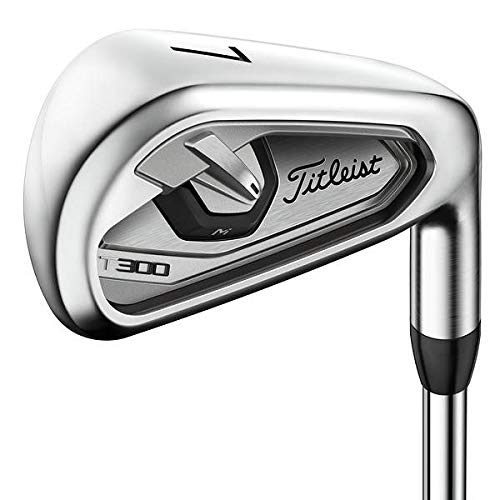 One of the hottest games on the market. If we talk about the best Titleist irons, then Titleist T300 irons hit the spot. Not only does it feel hot alongside high ball speeds, but the same classic Titleist looks make for a sleeping game for pro players.

The best part about T300 is that it is a game-improving iron that allows space for forgiveness alongside the ever classic premium feel. Made with high-technology details incorporated in the design, the razor-sharp thin face is perfect for the max hitting impact, allowing players to improve speed and launch.

Furthermore, the club includes a silicone polymer insert that allows for a greater feel, and the dampener face helps with the softness of the sole chamber. So that the player that experiences high-quality turf interaction with greater forgiveness for a beginner shot. 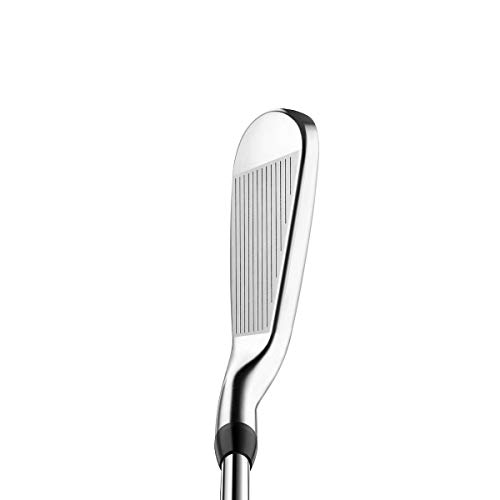 Introduce maximum distance to your Titleist equipment range with the Titleist T400. One of the most forgiving in the best Titleist irons, the Titleist T400 iron has been intended to be the longest iron in Titleist’s famous T series.

It surely is one of the most lenient irons available. It has the most grounded lofts in the Titleist range, yet the sendoff isn’t compromised with the T400s creating a solid, high ball flight. The split sole plan conveys smooth turf connection, while the super-slender face and empty head are invigorated by high-thickness tungsten weighting making this a strong and remarkably lenient iron. The set is moderate, with cutting edge lengths, sole widths, and lengths diminishing towards the more limited irons.

In general, we think the T400 is an extraordinary game improvement iron, one of the most mind-blowing distance resolves there that could truly assist higher handicappers with maximizing their games.

One of the older, high-performing Titleist irons, the evergreen Titleist 620 CB irons, is still being produced by the brand. Even though ever since the brand has introduced newer and better technology, detailed irons, clubs, and drivers with the incredible T series, 620 CB has yet to lose its charm for the longtime golf players.

The upgrade that Titleist offers with 620 CB is that it has a better, more refined, and improved tour sole. In fact, many golf players suggest that those who find T200 a bit too mature can start off with Titleist 620 CB.

Moreover, with great features like reduced offset, a thinner top-of-the-line field face, and a stabilized feel while striking, Titleist 620 CB gives you the right power mix of distance and feel. That is probably the major reason why people look up to using it for a nice clean game.

Not very forgiving, but definitely one of the most beautiful irons out there, 620 MB, is a true star of the show. You can’t help but fall in love with the premium facet of the club that offers the ultimate luxury for making a shot. Considered and famously known among golf players as the “Real Player’s Iron,” 620 MB is technically termed as a “one-piece, forged muscleback.”

So this makes up for a sleek delivery that might look deceivingly simple, but only the player can experience the feel and tremendous feedback that the iron allows. Significantly, the muscle back design is what has kept the most player going for this iron, and it never fails to provide.

One of the best Titleist iron for sure, 620 MB is great with workability and control. Not only the face feels smooth, but you can also easily intervene in the flight your ball will take after the swing and cater to some good strikes. 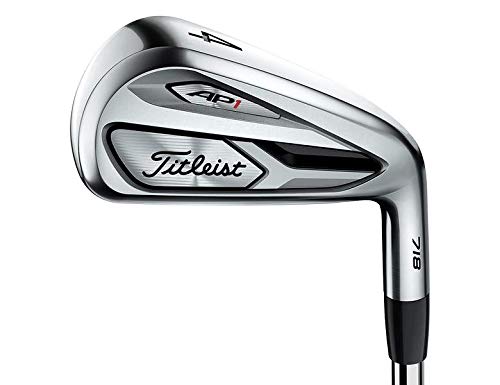 One of the best Titleist ironsfor beginners, the Titleist 718 AP1 is an all-rounder. It is a confidence enhancer with its design that allows for easy launching of the golf ball. These are the reasons why it naturally stood out and was a no-brainer for players that are towards the higher handicap level.

So it became relatively easy for them to play with a Titleist golf iron without worrying too much about the errors on the way. As the series range has been designed to be lighter in weight compared to others, the easy launch technique is a given even if you are a new golf player. That is precisely the selling point that Titleist markets that they can make a professional-looking iron better even for a beginner and enhance their performance. Additionally, the credit also goes to how the iron maximizes the player’s confidence to improve. 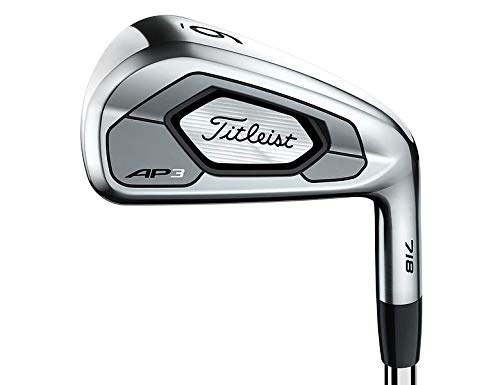 If you want to combine high launch, maximized forgiveness, and greater distance in a Titleist iron, you will get the Titleist 718 AP3. Even though they are not the brand’s newest, high-tech releases, they refuse to leave the market shelves as people keep coming back to it for the combo of three great features that others fail to provide as much. However, that only makes the 718 AP3 better for golf players looking to purchase such an iron as you can find them for amazing deals and discounts, given there are better offerings from the same brand.

Moreover, it is understandable that 718 AP3 looks a lot thicker than some of its counterparts, but there is a reason why we say don’t judge a book by its cover. Or this case, a golf iron by its thickness. Players who have played with it will tell you that the thickness is precisely what allows a relatively far and high launch for golfers. 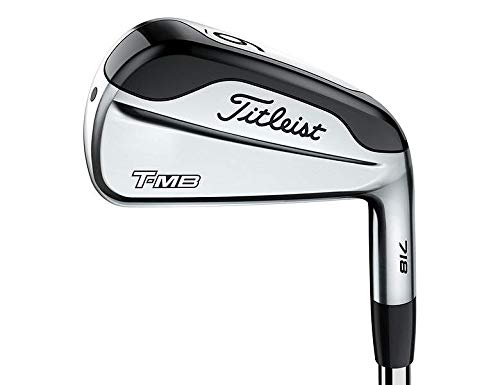 The look and feel of a hybrid iron created the mass golf players appeal that other brands couldn’t capture and became a signature with the Titleist. Moreover, with the impressive coverage of the distance, hollow bodily construction, and a significant transition from utility irons, the Titleist 718 T–MB is a must-have.

However, it is important to note here that due to the tech-similarity it offers to hybrid, Titleist has put down quite a hefty price tag on these beauties. Even though it is one of the best Titleist irons, it carries a sheer drawback for being one of the most expensive irons made by Titleist.

One thing can be established through and through that Titleist has the best irons without a doubt. The golf market might be filled with brands and equipment in all price ranges for every type of player, but Titleist takes the trophy home.

Want to take your game to the next level as you indulge your passion for golf? Titleist shall help you achieve it even if you are just a beginner. And if you are a pro-player, then these luxury golf irons will surely make for a good part in all of your equipment. Because you can’t second guess the aesthetics of Titleist.

The irons are made to perform and show others that you can perform. So now that you know about the best Titleist ironsout there in the market, it will be easier for you to make your purchases.